Last week LDC published and held an event at lawyers, Hogan Lovells, on the openings and closures of 2014. The evidence of what happened in 2014 lies in the numbers which I have summarised below but the bigger question is where will this lead in 2015 as for me a major CROSSROADS has been reached.

More detailed analysis showed that chain retailers were closing three times as many shops in shopping centres as independents, both independents and multiples were growing their presence on retail parks by +2.71% and +2.33% respectively with an additional 248 units occupied. Comparison Goods retailers continue to be hardest hit with a decline of -1.41% in 2014 which is the net loss of 2,037 shops! Leisure is the big growth area with an additional 950 units in 2014, which is an increase of +0.81%.

Significant changes are taking place in the locations we live, work and visit and these changes are equivalent to the industrial revolution as they are fundamentally changing the way we behave and most importantly how we spend. The internet, whilst seen by many as a threat, is a fabulous opportunity for both consumer and retailer alike. By way of comparison if one looks at the arrival of the car you could sit back as a horse stables operator and whine your way to oblivion or realize the opportunity and create the first garage to ensure people still stopped at your business and spent their money. Today in 2015 transport hubs are now the super prime for retailing! Even John Lewis and Fortnum and Mason are at St Pancras. The internet and the speed of technological innovation has democratized what was once a very expensive business cost and has enabled you to reach more customers than ever before. From a few hundred who might visit your High Street in the 1950s/60s you now have access to the world – all 7.2 billion! Access to even 0.1% of these people is revolutionary.

Recent results from the public retailers shows the challenge of maintaining sales and profitability especially if you are carrying significant debt from the years when everyone wanted 300, 400 or 500 shops and he who paid the highest rent got the shop! Ever wonder why Clintons got such good spots or why mobile phone shops were everywhere? They paid the highest rent and the same is true today especially in the fast expanding F&B sector e.g. Five Guys the new burger chain.

The challenge in 2015, apart from making sales, is that you have costs in triplicate when in the past property was the main cost. As well as rent you have massive IT costs and logistics costs if you are to support the omni-channel (total retail environment). Add to this increased property costs for many as they seek to create a destination store with experiences, excitement and memories and you have the perfect storm!

With over 80% of leases reported to be up for renewal by 2020 then we have much more change to come! Analysis of LDC data back to 2008/9 shows that chain retailers continue to consolidate and for many this is in out of town locations with lower rents per square metre, free parking, mezzanine floors and an overall easier logistics operation and easier space to make experiential – steel versus bricks! Independents whilst they have weathered the storm in many town centres have reached parity where they can just as easily go negative as remain positive. Other data tells us that only 50% of new businesses survive into their third year! Such changes are significant as we now have three locations to shop, sometimes some distance apart – the high street, the shopping centre and the out of town retail/leisure park? Where you go will depend on what you are looking for but in short you have CHOICE with the fourth and most potent choice is to remain at home and shop online!

Supermarkets and discount stores are in the thick of this ‘total retail’ battle and 2015 will be the year that only the fittest will survive. Whilst it is easy to quote Darwin it is how you evolve and not just change that will separate the wheat from the chaff. 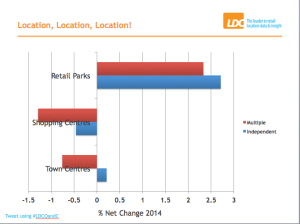